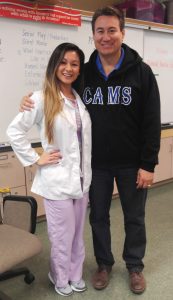 Philippians 4:13 I can do all things through Christ who strengthens me.

American University of Health Sciences (AUHS) clinical instructor, Kristen Soegeng was among the firefighters, policemen and other professionals that attended Career Day at California Academy of Mathematics and Science (CAMS) high school. Soegeng presented at CAMS Career Day on November 18th to educate and inspire youth who wanted to start career paths as registered nurses after graduation.

Soegeng arrived at CAMS high school fully dressed in sneakers and purple nursing scrubs. She began her presentation by asking the students if they watched medical dramas such as Grey’s Anatomy, The Nightshift, or Nurse Jackie. As the class whispered to one another about  their favorite hospital shows, Soegeng told the students that as a nurse she could not enjoy watching them. “I’m too busy paying attention to all the little details in the background that I can’t even focus on the main plot,” Soegeng said, “ I say, ‘That IV doesn’t look right’ or ‘That is so unrealistic’ and ‘That patient would never look like that.’ But I’m glad you guys can enjoy it though!”
Soegeng then went on to say how the Bachelor’s degree in nursing has been voted the most difficult Bachelor’s degree. The reason for this is because of the clinicals nursing students are required to take, according to Soegeng.

“You’re sitting down in a classroom and you’re learning a lot of theory work. But when they take you to clinicals, they expect you to apply what you learn directly on patients who are sick and dying,” Soegeng said, “You go through a lot of real life scenarios at a very young age. ”

Although the path to becoming a registered nurse is difficult, Soegeng told the students to not be discouraged.

“You have a calling in your life,” Soegeng said, “But if you have a passion you have to go after it.”

Soegeng told the class that she wanted to become a nurse when she was in the 10th grade. She was raised by a single mother and oftentimes had to help take care of her grandparents and little brother. Her upbringing helped her build her “innate nature” to “care for other people.”

Soegeng explained some of the major responsibilities of nurses which is to develop, carry out and evaluate the care of patients.

“We work very closely with doctors to figure out what the patient needs, what is the patient’s condition, what do they have, and how we can treat them,” Soegeng said, “We help the doctor develop a plan of care and we are responsible for carrying out the orders.”

She also told the students that nurses are not restricted to working in hospitals. There is a wide range of career opportunities for nurses including nurse attorneys who are expert medical witnesses, politicians who write health policies, and public health nurses who tracks pandemics. There are even nurses for NFL football teams, TV networks and Disneyland.

“You may think that Nurses go to college and they don’t need to learn anything else for the rest of their lives. But healthcare is always changing,” Soegeng said.

The medical field is constantly changing due to research and the development of new medicine and technology. Nurses must be flexible in order to learn and apply these new procedures to their patients.

“It’s my job (as a clinical educator) to bring the changes to the bedside nurses. I have to explain to them why and how we’re doing things differently,” Soegeng said, “I also teach in a nursing school. I take nursing students from the school and teach them in the hospital.”

Soegeng visit on Career Day was a nostalgic one because she attended CAMS high school from 2004-2008. She brought her high school i.d. and passed it around the classroom during her presentation. Her former AP World History teacher, Gene Patrick Almeida, was also present during her speech.

Soegeng attended UCLA School of Nursing in 2008 and graduated in 2012 with her Bachelor’s degree in nursing. From 2012-2014 she worked at Los Alamitos Medical Center as a telemetry staff RN. She began her career as a clinical instructor at AUHS in 2014.

“(AUHS) being a Christian university is the main perk,” Soegeng said, “I’ve been through a lot of rough times early in life and there’s a bible verse that says, ‘I can do all things through God who strengthens me.’ Being a nurse is what God wants me to do.”

AUHS is proud to have Soegeng as one of their most successful clinical instructors and wishes her the best in her pursuit to obtain her Doctorate degree. Soegeng plans to attend California State University Fullerton’s School of Nursing in August 2017 to study   for her Doctorate of Nursing Practice (DNP) degree. She will conduct communication research for her DNP in order to help “transform nursing on a higher level.”