When the opportunity to do “Pray it Forward” arose, I was very eager to take the chance as my first community service activity here at AUHS.

Despite my excitement, I felt nervous at the thought of speaking to strangers. However, the scenario of my first encounter made me think otherwise. My first 5 dollar bill and prayer was given to a homeless woman in a wheelchair. When I offered the lady five dollars, she was incredibly thankful and very willing to take a photo. She was curious about the activity and what school I attended, so I explained to her the mission and philosophy of AUHS. 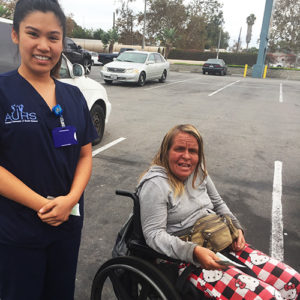 Then, she opened up to me and proceeded to tell me her story about her journey through health. She also introduced me to a friend of her’s that she met at a homeless shelter, who was pushing her wheelchair. As an infant, she was told that she would not live past seven years old. The tumors on her body multiplied, but the expenses were too much for her to afford treatment, but because of prayer, she is still living at forty years old. Regardless of her struggle for money, as soon as she received enough, she took a group of her friends who were also homeless, to eat at a restaurant. They thanked her, but she told them, “Don’t thank me, thank God. He is the reason why I can help you today.” Lastly, she said to me about difficulties with conceiving, with her health condition and that the doctor said that she would not have a successful pregnancy. Her daughter is now nineteen years old daughter and is working as a bodyguard and is going to school to help disabled children. This woman’s faith was very apparent in her voice. When we parted ways, she thanked God out loud.

In total, I gave 30 dollars away. I was surprised at how quickly it was to come across a homeless person. In our daily routine, we don’t realize how many people are in desperate need, in our neighborhood. This made me feel blessed for everything that I have. “Pray it Forward” opened my eyes to the hearts of the homeless and showed me that there is also a gift for giving.