Hepatitis C is an infectious disease affecting primarily the liver and is caused by the hepatitis C virus (HCV). Chronic infection with HCV is a high risk factor for developing serious liver diseases, particularly cirrhosis and hepatocarnicoma. HCV infection is a major health burden that affects more than 170 million people around the world, ultimately leading to more than 300,000 deaths per year. Direct-acting antivirals (DAAs), including inhibitors of nonstructural proteins (NS3/4A protease, NS5A, and NS5B polymerase), represent key components of anti-HCV treatment. Combined DAAs therapy has higher efficacy than their monotherapy, however, there are still issues of increased drug resistance, drug-drug interactions, and unwanted side effects. This requires identification of a new class of anti-HCV agents with potential to replace existing regimen. 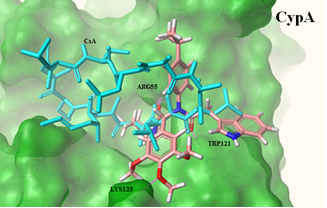 philins (Cyps) are a family of highly conserved cellular peptidyl-prolyl cis-trans isomerases (PPIase) and are involved in cellular processes including protein folding and trafficking. Cyclophilin A (CypA) is the most abundant member in the family, and its critical role in supporting HCV-specific RNA replication and viral protein expression has been demonstrated in several reports. Up to date, most of existing Cyp inhibitors are derived from two natural products, cyclosporine A (CsA) and sanglifehrin A, thus sharing the same structural backbone. However, the disadvantages of such large CsA-like structures, including high risk of having clinical safety profiles, complex synthetic route, and high cost, have led to identification and development of small-molecule compounds as novel CypA inhibitors for HCV treatment.

Dr. Yang was majorly contributed in identification and development of bis-amides as novel CypA inhibitors [1]. The published research article in Journal of Medicinal Chemistry was the first successful report on bis-amides as enzymatically active, site-directed inhibitors of CypA. The lead compound 25 is a selective, non-immunosuppressive, and potent CypA inhibitor with a structure highly distinct from that of CsA-based inhibitors, showing higher binding affinity, CypA specificity, and stronger anti-PPIase activity compared to those of CsA. It also effectively reduced HCV replication without acute toxicity in vitro and in vivo through the direct inhibition of viral proteins. The combination of the lead 25 with other antiviral agents resulted in a strong synergistic therapeutic activity compared to that of monotherapy or to that of CsA-drug combinations, suggesting the bis-amides as a promising host-targeted anti-HCV agent in the next generation of combinatorial HCV treatments. In order to optimize the lead 25, further structure-activity relationship and docking study of the bis-amides are reported this year [2]. The new bis-amide 7e is demonstrated to generate hydrophobic interaction with the gatekeeper pocket of CypA protein, thus suggesting its potential as a selective CypA inhibitor that can be used as an alternative anti-HCV agent in combinational therapy in the future.

AUHS is a Christian based, minority-serving university, which educates students for careers in the healthcare professions. AUHS emphasizes the values of faith in God, love of humankind, and belief that all people have a right to healthcare and deserve a good quality of life based on the wellness of body, mind, and spirit. The university celebrates diversity and reaches out to groups currently underrepresented in healthcare and research. AUHS provides the undergraduate and graduate curriculum, hands-on practical training, and supportive environment required to create competent and compassionate healthcare professionals.