From Local to Global: New Outreach of AUHS

Home » From Local to Global: New Outreach of AUHS 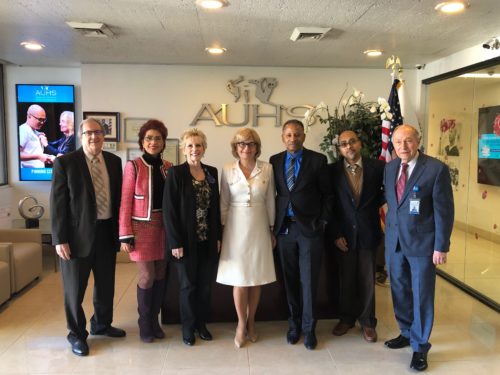 The American University of Health Sciences (AUHS) has a long-standing commitment to the goal of welcoming different diversity of students from all over the world. On February 14, 2020, AUHS School of Pharmacy welcomed The Lviv National Medical University (LNMU) visited AUHS to have further discussed the new collaboration agreement between AUHS and LNMU, one of the oldest universities in Europe, signed two months ago.

As the Memorandum of Understanding (MOU) with of Toyama University of Japan, signed on February 4, 2020, this time, with LNMU, AUHS – School of Pharmacy aims to develop relationships between these two universities in education, students and faculty exchange.

In this meeting, Prof. Oksana Zayachkivska, MD, PhD, DSc, head of the Department of Physiology at The Lviv National Medical University (LNMU), gave a brief overview of the second largest city in Ukraine, which is now renamed Lviv after its original name Lvov during the Soviet Union period. The city also carried an ancient name of Lemberg, which was the largest eastern city throughout the 300-year history of Austro-Hungarian empire. The city was at the crossroads of various cultures and migration activities, thus leading to the establishment of about 150 churches and 14 universities. Among these institutions, LNMU is the oldest and the recently resurrected Ukrainian Catholic University (UCU) is one of the youngest in Lviv. Prof. Oksana also has connections to UCU, which has an extensive public service outreach to the poor and underserved communities around the world, like AUHS. 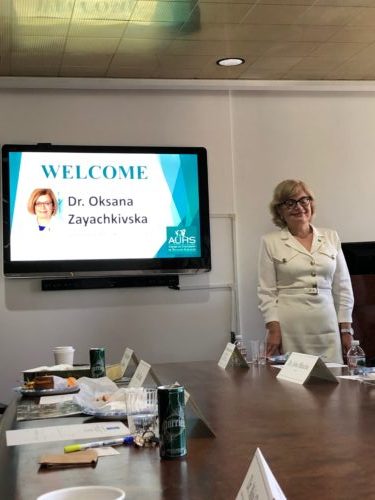 The new AIHS-LNMU collaboration agreement covers a wide range of planned collaborations in education, research and public service sectors. Since LNMU trains healthcare professionals (e.g., physicians, pharmacists, nurses) not only in Ukrainian language but also in English, the collaboration is a natural extension of LNMU, which is aiming for more extensive global outreach. Some of LNMU’s faculty, like Prof. Oksana, are internationally known researchers who engage in scientific symposia and congresses globally. The faculty members are also eager to send students for international exchange programs to offer opportunities for them to deliver conference presentations on their recent research work, under the leadership of well-known local scientists.

AUHS is planning a new medical school that focused on primary care in addition to the existing School of Nursing & School of Pharmacy, the collaboration agreement between AUHS & LNMU envisages visiting scholars from Lviv to teach the new medical students at AUHS, especially in fields like anatomy & embryology that experience shortages of qualified teachers in the USA. Thus, the multilayer collaboration agreement between AUHS & LNMU, now reinforced by the visit of Prof. Oksana, provides opportunities for growth and global extension of both universities.

AUHS is a Christian based, minority-serving university, which educates students for careers in the healthcare professions. AUHS emphasizes the values of faith in God, love of humankind, and belief that all people have a right to healthcare and deserve a good quality of life based on the wellness of body, mind, and spirit. The university celebrates diversity and reaches out to groups currently underrepresented in healthcare and research. AUHS provides the undergraduate and graduate curriculum, hands-on practical training and supportive environment required to create competent and compassionate healthcare professionals.